I’m a big science fiction fan, especially for when it comes to movies. It’s pretty common to get some physics wrong in a science fiction movie, but there are a few concepts that even the most accurate movies seem to miss. A big one that reveals some interesting physics is something that many people seem sure of: that outer space is extremely cold.  Below I’ll talk about what it would be like for an astronaut that has unfortunately floated away from his ship.

Heat is our way of describing the tiny wiggling of molecules and atoms–the more wiggling, the hotter

The sun emits a lot of visible light (along with a lot of other wavelengths of light which we’ll ignore for the moment), and all this light enters the tiny droplet at all different points along its surface (like shining a spotlight on a ping pong ball). Light that enters the droplet will bend its trajectory—this is called refraction, and happens when light moves from one material into another.
You may know that the properties of some matter depend heavily on the atomic and molecular bonds between the bits that make up that matter. As an example consider liquid water, which has chemical bonds between its molecules of a certain strength (i.e. how hard they are holding on to one another). These bonds arise from the electromagnetic attraction between atoms and molecules, like the attraction between positively-charged nuclei and negatively-charged electrons. These attractive bonds have different strengths depending on what atoms are involved.
When we talk about heat, we’re really talking about minute wiggling (or oscillations) of atoms and molecules against their bonds. Heat means energy, and energy comes from motion. Think about rubbing your hands together to warm them up—you’re expending the energy in your muscles to move your hands, and the faster you move them the warmer they get.
Liquid water exists within a certain temperature range because of how much the water molecules vibrate at those temperatures—if you remove enough heat, the temperature of the water drops until the ever-present electromagnetic forces between water molecules can win out over the vibrational energy, and the molecules get locked together more rigidly. This locking together is the formation of a solid, in this case ice. The opposite happens when you add heat to liquid water: eventually the electromagnetic forces can’t keep the water molecules very close at all because of how much they are vibrating, and that lets some water molecules escape the liquid, now in the form of water vapor.

There are three ways to transfer heat: conduction, convection, and radiation

How do you transfer heat into a material? You can probably think of a few examples from daily life: if you touch a hot pie pan that’s been in the oven, the pan feels hot and you may burn yourself. The molecules in the metal pan are vibrating much more vigorously than those in your skin, and when you touch the plate your skin molecules get knocked hard by the metal molecules, transferring energy as heat into you. This heat transfer method is called conduction, which comes from the Latin word meaning “bring together”, and happens only when two objects physically contact one another.

Think back to the pie pan and oven for a moment. The oven transfers heat to the pie pan (and the baking pie) via another mechanism: convection. This is when heat is moved by a fluid, in this case air inside the oven (in physics we use the word fluid to mean air or liquid, since both of those materials expand to fill their container, but can still move around within that container, as opposed to a solid which maintains its shape and orientation in space if left alone). The oven walls are quite hot, and air molecules that touch it are given energy in much the same way the pie pan gave your skin energy via conduction. This time, though, the heated air molecule bumps into its neighbors, heating them, and moving through the volume of air, bringing heat to other regions of the oven space.

Eventually heated air will also bump into the pie and pie pan, transferring its energy into heating these things. Since the oven walls are continuously given energy from outside, eventually all air in the oven will be at the temperature of the walls, and after a time the pie and pan will also reach high temperature (the outside gets heated first, so that’s why things need to spend a while in the oven sometimes, and you often stick thermometers inside what’s cooking—you have to wait to get the heat to transfer into the center of whatever is being cooked).

Now imagine our astronaut floating in space—he’s moved away from his ship, so there’s nothing to touch in order to conduct heat away from his suit. There is also no air in space at all, so there’s no convection to carry away his heat either. In this way space is a great insulator—heat within something tends to stay inside that thing, except that there is a third mechanism that does apply in space…

Radiation always occurs, and the human body radiates like a 100 Watt light bulb

Radiation is the transfer of heat via electromagnetic waves, or light. It turns out that vibrating molecules emit light as part of their vibration, and because of the nature of the vibration this light is always in the infrared spectrum (wavelengths longer than visible light). Absolutely everything that has heat will radiate in this way, and hotter things will radiate more. That’s why infrared cameras are good at seeing humans and animals at night—there may not be any visible light around, but they’re always emitting infrared light, and you can see this if you have a camera specially made to view these wavelengths–check out the picture of a dog taken with an infrared camera below.

Some scientists back in the 1800’s discovered the expression for how much energy is radiated from a source based on how hot it is; this is called the Stefan-Boltzmann law in their honor.

The astronaut in space is going to radiate everywhere he’s exposed to space, or in other words at every point along his suit or skin. Humans are around 100°F, and have an average total skin surface area of about 2 meters. Using the Stefan-Boltzmann law we can calculate that the average human emits about 800 Watts (or 800 Joules per second)—that’s about the power used up by the average coffee maker.

Here’s the important point: there is a ton of heat energy inside a human. For this we have to consider how much the average person weighs, since all of that matter will be vibrating, so it all has heat energy. 70 kilograms (~150 pounds) is the average human weight, and if all of that mass has a temperature of about 100 °F, then that human has 84 million Joules of heat energy. That’s as much energy as is given off when detonating 2 tons of TNT!

But hang on a second—we just said there is no conduction or convection in empty space, so how can it have a temperature? This temperature comes from light radiation that is present everywhere in space—it turns out its leftover energy from the Big Bang! Those details are for another post, though.

The astronaut’s temperature would decrease by 0.16 Kelvin each minute in space

Unfortunately, our astronaut will start noticing the effects of his radiative cooling long before 29 hours is up. Our bodies are designed to operate within a small range of ideal temperatures—for example, hypothermia typically sets in when core body temperature reaches 95 °F (or 35 °C instead of the normal 37 °C). That few degree Fahrenheit drop will only take 12 minutes for our average human astronaut radiating at 800 Watts. So his biggest worry is definitely running out of breath, and there’s no way he’ll turn into a human icicle even after a number of hours.

There’s a very common example of using a vacuum to prevent heat transfer from convection or conduction, and you’ve probably never considered how it works. Ever wonder how your Thermos bottle “knows” to keep liquids inside it hot or cold? Of course it doesn’t “know” the difference, it just has an area of vacuum between the outer surface (where you hold it) and the inner surface (that the liquid touches) so that no heat can transfer through conduction or convection. The reason this won’t work indefinitely is because radiative heat loss still occurs through a vacuum (and because the inner and outer walls have to connect at the very top of the bottle in order to make a seal to keep air out of the vacuum). Click here to find out more about vacuum insulation.

Bonus physics—everyday example of insulating heat by using a vacuum

Ever heard the phrase “in space no one can hear you scream”? It turns out that’s true, and it has to do with the nature of sound and the vacuum of space. We’ll talk about this in an upcoming post! 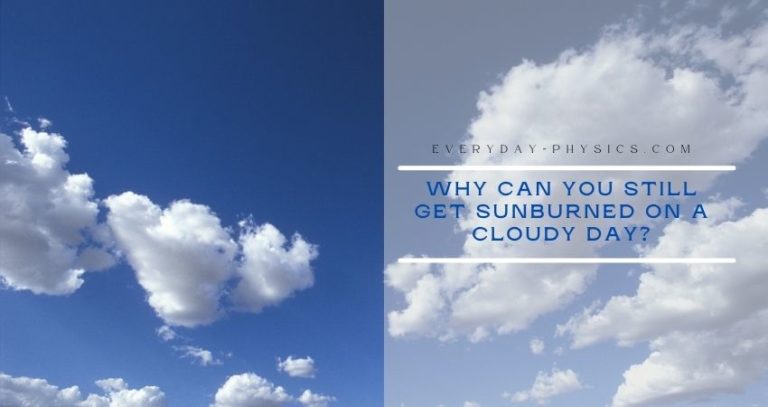